Available for purchase now:
Just click on the book cover below!​ 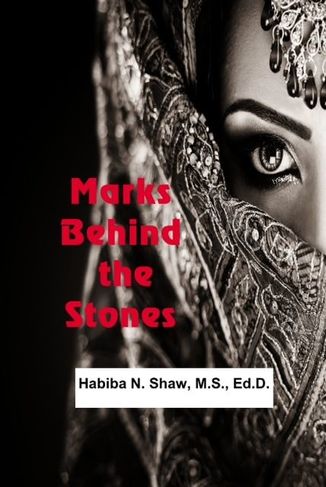 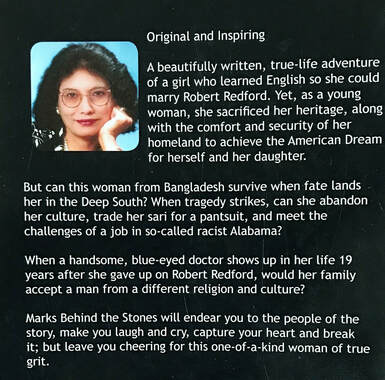 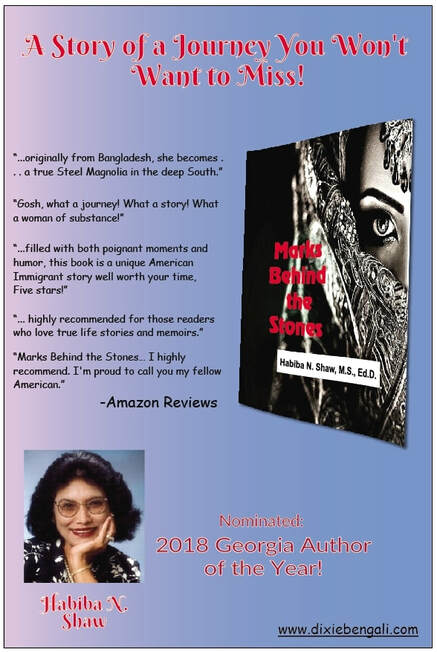 A young bride leaves her Bengali homeland for life in the free world, and finds a 40-year struggle of cultures in America’s Deep South. An engaging, uplifting tale of courage, heartbreak, perseverance, and survival…it’s all here in Marks Behind the Stones. A must read."
​- Frank Allan Rogers, author

Two Cultures, One Life: An Odyssey from East to West

Epic journeys, heroic treks, have been the stuff of the literature in all human cultures, as the heroes of those tales boldly go to new environments in the face of great challenges. Habiba Shaw’s memoir of her own life’s journey reflects many of those same challenges on a personal level. Uprooted from her childhood milieu in Bangladesh and transplanted to south Alabama, Habiba Shaw’s memoir gives her readers a delightful and thoughtful education on a number of levels, showing her own multicultural background and development as she works to educate the people of her Deep South community on nutrition and lifestyle in an attempt to improve their lives.

From the beginning of her narrative, Shaw delights the reader with her honesty and her clear sense of herself.  Her childhood experiences, filtered through her mature adult awareness, give the reader a clear, sometimes amusing picture of the young Bengali girl who learns English so that she can marry Robert Redford. Shaw gives the Western reader insights into her culture as a young girl in a traditional Muslim culture. She describes her daily life with her family, her struggles with school work, and her relationships with her friends. At the age of nineteen her life changed forever when she became engaged, as her family accepted the proposal of Abdur Razzaque, a young man eight years older than she. Shaw describes in detail her arranged marriage and the Islamic ceremonies involved. She is honest in her reactions to the marriage and the changes she experienced in her life. The Western reader learns of the cultural differences that Shaw experienced as her new husband departed from Bangladesh for London to pursue a doctorate in biochemistry. She followed him later, leaving her country in the midst of a horrible war, as she began the first chapter of her odyssey from East to West.

Shaw describes vividly the many culture shocks she experienced as she began her married life in unfamiliar Western cultures. She spent approximately five years in London, adjusting not only to her new husband, but also to the inhospitable weather, the unpalatable (or at least different) British cuisine, and the many cultural differences she encountered in those first years. As she pursued her own graduate work in nutrition, Shaw gave birth to her daughter Faria, as her husband completed his doctoral work and accepted a post in Ontario, Canada. After two years in Canada, with more new adventures and discoveries, Shaw’s husband accepted a teaching position at the Tuskegee University, also doing research at the University of Alabama at Birmingham (UAB). Once more the family was uprooted, and Shaw’s journey of self-discovery continued as she and her young family departed once more on a journey toward new experiences.

Shaw’s experiences in the United States constitute the majority of her memoir, and the joys and tragedies of her personal life, along with her experiences as a nutritionist in Eufaula, Alabama. Shaw details the tragic loss of her husband in an automobile accident, resulting in her being the single mother of a small child, living in a radically different culture. Faced with the prospect of providing for her daughter, Shaw became a Cooperative Extension agent, teaching nutrition to people in her community, a challenge that she describes at length. Her reactions to traditional Southern food are humorous as she describes the fat and salt laden fried food that most of her clients ate. Her dual perspectives as a cultural transplant and a nutritionist make her responses doubly interesting and funny. In addition to being entertaining, this aspect of the book also provides the reader with useful insights into healthy nutrition and lifestyle changes.  Shaw details the changes in her personal life, including meeting Dr. Tim Shaw (with considerable match-making and wheedling by friends), whom she eventually married. She earned her doctorate in Health Care Education. Eventually, she and her new blended family moved to Georgia where they currently reside.

Habiba Shaw’s writing style is unique and engaging. Her voice comes across clearly and reflects her personality and culture as she writes of her journey from Bangladesh, through England and Canada, to the United States. Her approach to her narrative is clear and objective, but she maintains a certain ironic distance, especially in talking about herself, that is amusing and entertaining. When she tells of her obsession with Robert Redford, her uncertainties about her arranged marriage, or her reluctance to get emotionally involved with her daughter’s doctor, Shaw is honest and somewhat self-depreciating. As she writes about nutrition and health, especially about her frustrations over attempting to educate her clients about the dangers of their unhealthy diets and lifestyles, Shaw is passionate and straightforward in her approach. Her professionalism, combined with her personal attitudes, make these segments educational and entertaining at the same time. She describes her response to one typical meal: “I could still picture the ladies in the kitchen taking lard from a red bucket in the kitchen to fry the chicken, drowning the collard greens in the grease of seasoning bones and ham hocks, having the butter beans simmering with bacon, and making gravy from the burnt residue of fried chicken.”  Her vivid detail and word choices make her reactions clear without further editorializing.
​
Habiba Shaw’s memoir of her life’s journey gives the reader much to enjoy and much to ponder. Her engaging style and her vivid use of detail allows the reader to experience the joys and sorrows, the challenges and successes as she moved through cultures and learned from them. Seeing Western culture through the eyes of a woman who grew up in a Muslim culture in Bangladesh provides the readers with a unique lens through which to observe ourselves. We have an opportunity to learn not only of the writer and her own experiences in her odyssey, but also to learn of ourselves and our own culture as we view ourselves through that unique perspective that Habiba Shaw’s memoir gives us. Learning about ourselves and our own journeys as we learn of the writer may be the most important goal of reading, and Habiba Shaw’s book has succeeded in that goal.

Dr. Covel is an American poet, novelist, and lifelong educator. He earned his doctorate degree in American Literature from Georgia State University. He is a retired professor of the Georgia Institute of Technology and also taught English in high school. He writes book reviews for West Georgia Living Magazine.